We’ve released an update today that includes further improvements to the Rollup List changes we released earlier this year. We’ve reduced the number of clicks involved in adding records to Rollup lists, tweaked the column layout to give more useful information about records being added, and created new navigational shortcuts to improve your workflow. We’ve also made some minor improvements to printing and filtering lists.

When adding records to Rollup Lists, we have replaced the Name, Company, Position columns so that only the column for the type of records you’re adding is shown. In place of the other two columns you’ll see Added and Ignored.

In the example shown below, only the Name column appears and all three columns are green. If we were adding Companies, you would see dark blue. Light blue is used for Positions. These colors are used consistently on other major record screens in PCRecruiter.

We can see in the new columns that 18 Name records have been added to the “Cleveland” list, bringing the total up to 107. We can also see that one of the selected records was ignored because it was already on that Rollup. 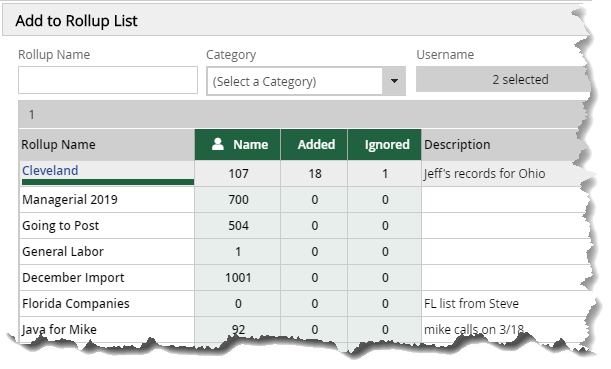 You’ll also note that the Rollup’s name “Cleveland” is a hyperlink. With the new update, you can now jump to the active Rollup directly from this screen by clicking its link, rather than closing the Add panel and navigating to the main Rollups area.

We’ve also reduced the clicks involved in adding records to a newly-created Rollup. In this version, your currently selected records are automatically added to the Rollup as soon as you save the new list, eliminating the need to click on the new list to add the records.

More great new features are in the works, as always. Share your own ideas for how PCRecruiter can improve your business in our Ideas & Requests Forum, read other users’ suggestions, and vote for the ones you’d find most helpful. We are listening!